skip to main | skip to sidebar

THE PORTUGUESE SCENE OF 1972 BY ROBERT SIMPER

Rubert Simper at the wheel of the Thames barge LORD ROBERTS in the Medway, 1968

Robert Simper was the responsible by “Sail Review” of the SEA BREEZES, the British Magazine of ships and the Sea, which I gave my collaboration in this small work inserted in that magazine.

The CREOULA and ARGUS anchored in river Coina, Tagus estuary, near her owner's plant, 1972

It seems that one of the last stronghold of vessels using sail is finally doomed.
Every April the cod “liner” schooners of Portugal have sailed to the Grand Banks, but for several years this has been increasingly uneconomic and the owners are now converting to pure motor-ships using drift nets.
In March I boarded the 1.195 gross ton motor-ship NEPTUNO at and was shown by Capitão João Matias how the five new small boats will be operated from her. Built 1958, the NEPTUNO formerly carried 102 men who fished from dories with outboards; now she will have only 60 men but will still return to in October with salted cod and cod liver oil for export for .
The Parceria Geral de Pescarias still have the schooners ARGUS and CREOULA which I was able to see their cod-drying plant at . The ARGUS will not sail in this year’s campaign but she might go next year. The CREOULA will sail with a total of 68 men of which 54 will be fishermen using dories. O Capitão Marques was at least optimistic about his beautiful 4-masted schooner remaining in operation for a few more years.
From what I could gather in it seemed that only about three of the auxiliary schooners would sail to the this year, the rest being motor-ships. Mr. me that north once had an important fleet of Grand Bankers, but no longer has any.
The side trawler INVICTA, motor-ships SENHORA DO MAR and VILA DO CONDE were transferred for other ports. As recently as 1956 still sent 25 schooners to the and many of these were lost there. One of the last of these was the 4-masted, 635 gross ton auxiliary CONDESTAVEL, built at Gafanha, Aveiro, in 1948 and converted to a motor-ship before being lost.
Of the Portuguese coastal traders only five former sailing vessels are still trading as motor-ships. These are the JAIMESILVA, SADINO, VITORIOSO, VIANENSE and which trade between Setubal, Lisbon, Oporto, Leixões and Viana do Castelo carrying cement or salt northbound and returning south with ballast.
Vessels that appear to thriving are the River Tagus fragata. These gaff sloop sailing barges carry freights from to wharves further inland. Tiller-steered, they have an open hold and their most noticeable feature in their graceful curved bow. The mast rakes aft and the loose footed mains’l is stowed by letting the peak halliard go until the gaff is against the mast, the lower part of the sails picked up with a brail.
The fragata are expertly handled and in dock everything is stowed neatly. In recent years I have been accustomed to looking at working craft reminded me just how much of the mystic is lost when a craft stops trading. 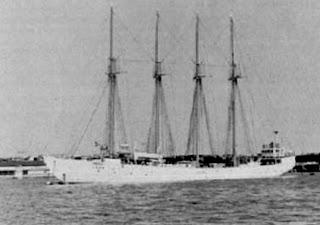 The CREOULA as motor-vessel anchored in the River Coina, Tagus Estuary, ready for 1972 cod fishing season.

The ARGUS on laid up, anchored in the River Coina, Tagus estuary, in 1972